Ever since the terrorist attacks on the World Trade towers on September 11, 2001, I have been unable and unwilling to visit the site. I knew that visiting would be highly emotional, and I both wanted and didn’t want to be with other people when the tears came.

Trees fill the park amid two deep fountains and the entrance to the 9/11 Memorial and Museum in front of the new 1 World Trade Center tower. The fountains did not burst up into the sky, but fell down into the ground like waterfalls against smooth marble walls. In the center of one fountain contained a smaller square opening where water continued to fall. Amid all the newly planted trees that stands one tree that was the only remaining tree on the property to survive the attacks. A guide told us that the tree had been removed from the side, nurtured, and then replanted.

The building to buy the tickets and enter the museum seems small. However, that’s not the museum; not really. One of the guides told us that the support wall was preserved as a national historic monument. When that happens, the laws say that the public is required to have access to view it. As a result, they decided to build the entire 9/11 Memorial and Museum around this wall and the public right to view it.

After entering, we took one set of stairs into what you first think is the basement. On the right side of the stairs, two huge steel beams sit powerfully aside a large picture of the World Trade Center North and South towers. 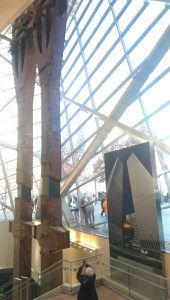 I felt a sense of both awe and sadness that stayed with me. We walked down a hallway that played recordings of people talking about the events that day while faces caught in gaping amazement at the Towers as they burned were projected onto marble masts that dotted the hallway. The combination of the audio and visual memories brought up such emotion. I cried, asked for a hug from my friend, and held on.

We descended another set of stairs that brought us deeper into the museum. On our way down, we paused on a landing where we were able to get a bird’s eye view of the last remaining support wall, steel beams from the North Tower where the plane hit on Floors 96-99, and the last support beam from the former site. 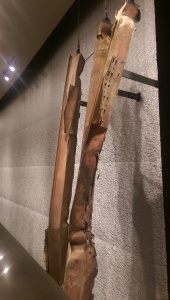 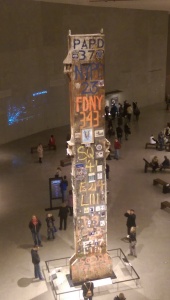 Along the second half of the staircase was a cast of part of the Survivor’s Staircase, one pair of the ground-level escalators in one of the buildings. 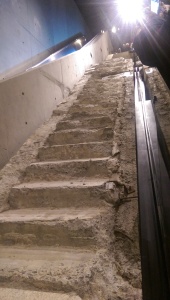 One wall opposite the staircase included a quote from Virgil amid bright blue tiles that felt like the one message of hope in the whole place. You could also see the bottom of the fountains above you, which were the footprints of the two towers where they used to stand. 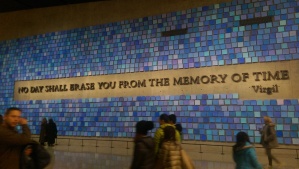 Around the fountains’ base were some memorabilia (I’m not sure if there a better word exists), such as the Ladder 3 truck and a section of the antenna from the North tower. 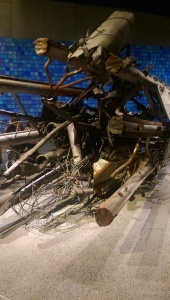 Beneath one of the fountains was a moving museum. This simply means that you are to walk through the museum and exit the other side. We were not allowed to take photographs. The museum starts with a timeline of events beginning with the first plane hitting the tower in NYC and including the events at the Pentagon and in Pennsylvania. The timeline included writings, physical pieces of evidence of that day, and audio and visual recordings.

Shortly after walking into the museum, you hear the voice of an employee in the South Tower leaving a message for someone that a plane had hit the first tower and they were safe because they were in the South tower. The recording looped, playing in endless repetition. I cried thinking of this person and all the people who were affected that day.

One screen showed loops of video of first responders and people running around outside amid streams of falling paper. A team of ten firemen congregating in one of the Tower lobbies picked up huge amounts of fire hosing and proceeded to continue into the building. I felt like I was watching a horror movie where you know the bad guys are on the side of the door, and your mind cries out, “No! Don’t go in there! Go back!” Immediately, I knew that there was nothing to be done as the time had passed and these first responders gave their lives to try and save others. I felt sick to my stomach.

I didn’t want that day to end, as terrible as it was, because it was the last day that I got to share with Sean.

While we were still walking through the museum, I reached my limit. I could look but not mentally, emotionally, or psychologically absorb all the detail that lay in front of me. After we exited the moving museum, we were let out in the area where the last support beam and the last support wall were. The support beam included memorabilia and testimonials to those who had died that day.

I sat down on one of the many benches by myself and cried again. When we were done, we took the exit escalators up to the surface while taps played around us. I write this post as I sit in a doctor’s office waiting for my mother, and I want to cry again.

When I think, I mean really think and contemplate what happened on September 11, 2001, the tears cannot help but come. I cannot comprehend how anyone anywhere can conceive of such an evil plan, let alone carry it out. My heart goes out to all those lost that day and their families and friends.

I will never forget.