I think it’s time for a change of pace. Today I’m going to talk about and share cute animals with you.

First, I have to bring up of two cutie pie cats that I share my life with: Normie. More frequently as of late, Normie has been jumping up to sit on the cabinets above the kitchen sink so he can wash me do the dishes.

Here are some shots from this mornings Kitchen Party with Momma:

As soon as you’re done with those dishes, we’ll play. Right, momma?

Earlier today, my cat Gwennycakes tried to meow at me. She’s a cat, you’re thinking. Of course, she meows! Well, not really where Gwennycakes is concerned. I’m not sure why she did it, except that I’ve been playing with her with a toy that she really loves for the last three days. Maybe she’s trying to tell me something?

Here are some shots of my beautiful girl:

These are the only animals who share my life. But out there is a baby goat named Pipsqueak who is trying to become friends with a litter of puppies. Well, I can’t really describe it, so you should really just go see it for yourself.

Will Pipsqueak Ever Make Puppy Friends? Watch this and find out!

And now, a bunch of cats who can now live their lives as hamsters!

No post about cute animals would be complete without a mention of Gronk’s, posing with kittens, sometimes shirtless!! Here are a few for your viewing pleasure:

A man, any man, poses with animals wins me over. A very hot man with kittens and with less clothing is almost like I’ve died and gone to Heaven!

Last  night, I went downstairs to find my cat Normie. We live upstairs in an apartment from my mother, but our doors are often open to allow the cats to visit her. Most nights, I find him and bring him upstairs.

All the lights were off except for the one in my mother’s bedroom. Her door was halfway open. I was about to knock, but I could hear that she was awake by the turning of a page in a book.

I poked my head inside to see this: 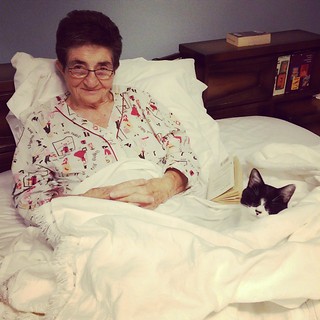 I bust out laughing. I’ve never seen Normie get under a blanket with my mom before. I had to get a close-up of his cutie-pie face: 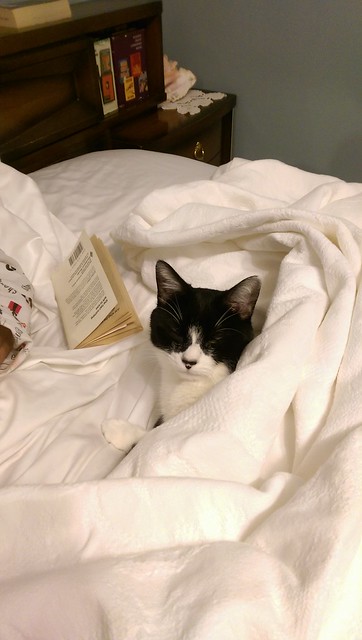 Then Normie opened his eyes. I tried to get a shot, but a yawn got in the way: 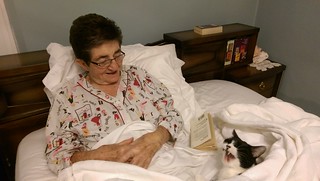 Mom and I can’t help but laugh at Normie. Whatever this cat does contains an element of entertainment: 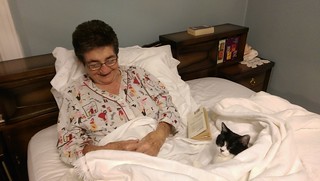 Then more laughing and licking: 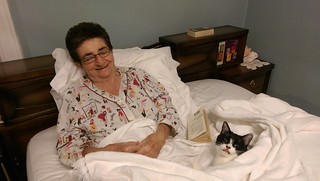 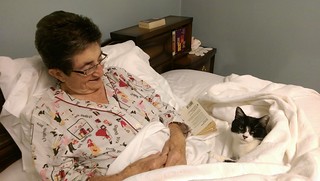 Although I still think that my favorite photo was the first one I took because Normie looked pleased as punch to be snuggling under the same bedspread as Nonna.

Now he doesn’t have to share, which has never been his strong point.

Normie’s idea of getting Gwenny to play is to lick her head a few times and then bite down hard on her jugular while he tries to sit on her. Sometimes, he’s so rough that she cries out in pain. In every instance, she manages to tear herself away and runs under the bed. I try to discourage him by stopping on the floor to prevent an attack, but all I succeed in doing is confusing him and scaring off Gwenny.

Earlier this evening, he had executed this plan (no crying out by Gwenny, tho) and took her spot on the floor. Other than wanting to play, I suspect that the reason that Normie goes after Gwenny’s neck is, as far as I can tell, because Gwenny is in a spot he wants or is getting attention from momma that he wants. His alpha pride won’t allow it, so he bullies poor Gwenny into clearing on out.

Afterwards, Gwenny came back. First, she stalked towards him. Instead of pouncing, she came over and sat down like you see in the picture. Then she took her paw and put it on his nose. Boop! She lifted her paw off his nose and putting it back down a few times more. Boop! Boop! Boop! Then Normie reached his paw out and batted her arm. Boop!

By this time, I am trying to choke back squeals of cuteness and trying to work my phone to get the camera. I managed to get the one photo that is featured in this post. I stepped on a jingly toy that sits under Normie’s back. In an instant, both he and Gwenny jump up and the moment is ruined, gone forever.

Gwenny is sitting on the other half of my desk, and Normie is in a horseshoe shape with his back leaning against a scratching post trying to get some ZZZs.

Not a bad plan.

I have been meditating on and off since May 2010. My physiatrist who treats me for fibromyalgia suggested that I meditate twice a day for 30 minutes, once in the morning after waking and once in the evening before dinner. I had been resisting the idea, and then I thought, Why not? What have  I got to lose?

Unlike my morning meditation in bed, I sit in a rocking chair that used to belong to my mother-in-law Sofie: ornate dark wood with silver-blue satin cushions on the seat and the back. After sitting, I drape a fleece blanket over my lap, turn on my phone’s timer, let my hands lie in my lap, close my eyes, and begin.

Many thoughts fly through my head: what I am going to write about, things I was doing during the day, what I am going to eat for dinner. To go deep into meditation, I bring my attention to my breathe. I feel air tickle the hairs in my hose and the rise and fall of my stomach. A rumble from my intestines shakes through to the surface of my belly. Thoughts come to the front again.

I bring my attention to the sounds I hear. I am breathing slowly. The sound of far away traffic seems to be approaching in growing, pulsating ways. Traffic sounds morph into the high-rotation fan sounds. Suddenly, I am aware of a plane flying overhead, the engines waxing and waning as it moves lower and farther away towards JFK International airport.

GwennyCakes, my tuxedo girl cat, trills as she enters the bedroom. Norman chirps a few times and then climbs onto my fleecy lap to lean against the crook of my left arm and clean his feet, his belly, his legs. I smell the faint odor of wet cat hair. My left arm goes slightly numb as Norman leans back to get good perspective on the next lick again and again. The refrigerator hums from the kitchen, two rooms away.

I think about writing meditation as still life. My brain gets excited about the idea and wants to run with it. I open my eyes for a few moments and then let them drift back down again. I mentally relax my forehead, my shoulders, and my legs. I let my jaw drop gently. I adjust my neck in an attempt to find the sweet spot of no strain and no effort. I sit for 30 minutes until my Chambered alarm goes off. I move to grab my phone on the bureau next to me and turn off my alarm.

After yesterday’s post, I solemnly swore that I would take step one towards eliminating my internal struggles with writing. I remembered an idea I heard once to keep a list of writing topics nearby. That way, I could have a handy list of ideas and get to writing. No excuses!

I took out my book of square lined paper, wrote ‘Writing Topics:’ with an underline, and put down the first thing to do: I wanted to write about what I will write about in this blog. That was properly serious enough to get back into the habit of daily writing, whether or not anyone reads it.

My black-and-white, mask-and-mantle cat Norman, however, had other ideas.

I went downstairs to visit my mother and help make phone calls for her. I asked her where he was because I had not seen Norman in a while. She said she remembered him going upstairs. So did I. I walked around and I called for him in my apartment but heard nothing. In the first floor foyer, I could hear him crying. It sounded like he was in the closet behind the foyer or in the basement ceiling. I retrieved a bag of Whiskies tuna treats from my bedroom dresser drawer. I walked around my apartment, the entire first floor, and the basement, shaking the bag and calling for Norman. I checked closets, opened closed bedroom doors, and stood under open basement ceilings. He answered a few times but did not come.

If you know Norman, then you know his hiding from you is not normal. Finally, my mother decides to look underneath the recliner chair because she was sitting in it earlier. Norman was not under the chair. Nope! Instead he was here:

Normie was inside the back of the recliner chair. Although we looked, we could not find an entrance to the back from underneath. The back flap, seen here were Normie is sticking his nose out, was velcroed inside the back. Off came the velcro and out came Normie. I gave him some treats.

My mom said, “You know, Norman’s probably going to think that if he gets stuck in the chair, you’ll rescue him and give him treats.” After the way my heart pounded and my stomach churned when I could not find him, I think I am pretty much OK with that.