For a variety of reasons, we decided to have a low-key celebration of our 20th wedding anniversary. This called for something more than a Hallmark, store-bought card. So I made one for Mark instead: 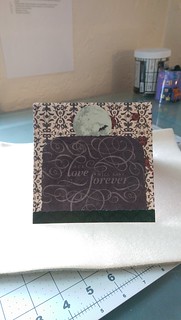 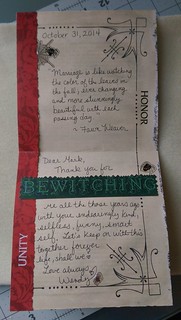 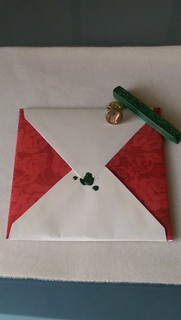 On Thursday night, we went to dinner at Marble, our favorite go-to restaurant in Floral Park. We’ve developed a good relationship with their main bartender, Doug, who recently featured an article about making drinks in an industry bartending magazine, and Matt, their eminent chef.

On Friday, Halloween, we drove up to Sleepy Hollow, New York, which is about an hour from where we live. We walked around the Sleepy Hollow Cemetery for two hours and took many pictures. You can see the whole lot of them in my Sleepy Hollow, NY album on Flickr. However, some of them were particularly beautiful, including this Egyptian – themed mausoleum: 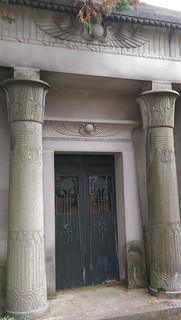 The front of Henry Villard’s monument: 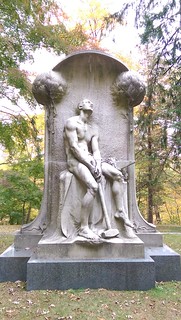 The stained glass inside the Helmsley’s enormous mausoleum: 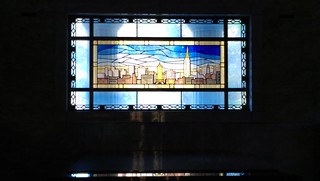 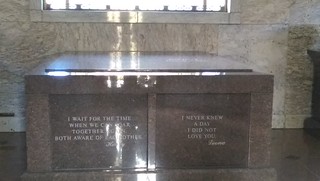 And a panoramic view from the front of the Helmsley’s mausoleum:

The faux Headless Horseman’s Bridge over a brook and under fall foliage: 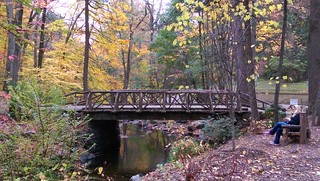 I snapped 90 photos. Too many beautiful graves, monuments, statues, and views to put here. I definitely want to return because I failed to get pix of the Crane and Van Tassel headstones that were there.

Afterwards, we ate lunch at JP Doyle’s in one of Sleepy Hollow’s neighborhoods. We drove over the Hudson River on the Tappan Zee bridge to the AMC Palisades in West Nyack for a retro showing of Tim Burton’s Nightmare Before Christmas, one of my favorite holiday movies.

I continued the anniversary celebrations by cooking some of my husband’s favorite childhood and current foods. I went a little overboard with the desserts. I had to make banana bread because the bananas were very ripe. And I couldn’t help but make two of his favorite desserts: pumpkin pie and apple pie. I wanted to make sure we had dessert ready before I started in on the dinner foods. 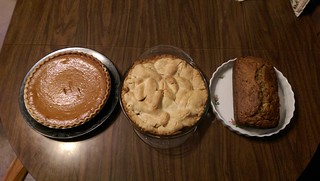 For dinner, I cooked up the sauerbraten that had been marinating in the refrigerator and spaetzle. Both are German dishes that Mark’s mother used to make, and it had been a while since we’d made them.

We had a few technical difficulties. I had to ditch the red cabbage dish we were making because we did not shred the cabbage enough; it became a huge unwieldy pile. I also didn’t stir the dough enough before putting it in the ricer, so the spaetzle (German pasta) came out very tiny. The sauerbraten and spaetzle had a ginger snap & stock sauce pour over. 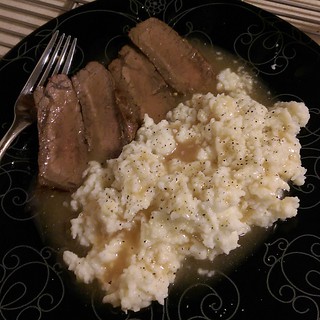 Overall, not as good as Mark’s mom used to make (How could it?), but edible nonetheless. Luckily, I bought a huge cut of beef that we cut into thirds so our future sauerbratens await!

Earlier in March, I became excited to make handcrafted greeting cards. This excitement was due to a creative surge I have been experiencing and the lack of custom cards near me. In Cambridge, MA, my husband and I went to Bob Slate Stationer for a lot of our cards.

I admit that my first card to a friend was not as good as I would have liked. I had not yet replenished my supplies and I wanted to ensure that it was received on or before her birthday.

The end of March also brought the first wedding anniversary of two friends. I just got word that they received it and loved it.

In both cases, I wanted to wait until the recipients received the gifts to write about it. It would not have been much of a surprise if they read about their cards here first.

When you haven’t participated in a hobby in a while, it takes a while to get up to speed. You have to relearn when to use glues, how to make proper cuts, and how to use handwriting effectively. I’m tempted to find a calligraphy course so I can take my handmade cards up a notch.

Once in a while, progress moves ahead like the patter of paws quietly and rapidly thupping against the antique carpet.

After two attempts at outlining a 2008 NaNoWriMo story went nowhere, I purchased Scrivener so that I could break up the story in chunks, reorganize quickly, and see the whole more easily. After I did that, I was able to see exactly what I wanted to pull: about half the story.

After looking at the breakdown, I got the idea to write a story summary. The summary would put down the sequence of events that transpire from beginning to end. My purpose was so that I could flesh out the storyline, develop believable characters, add themes, etc. Also, I could write new scenes while knowing in advance what needed to be written.

After a few sessions lasting several hours each, I finished that up today with a 2,146 word story summary.

At the end of January, I took a NaNoWriMo webinar with The Book Doctors on how to make editing and revising your story fun. Before that, the thought of looking at my story and yanking out the first half (about 25,000 words) made me sick. All I could see was the terrible waste and all the work I had to do.

At the end of the webinar, Arielle and David said they would give a 20 minute consult to anyone who bought their book and provided a receipt. Although I bought the book soon after the seminar, I waited to contact them until I had a solid idea of what I wanted done.

As I concluded the story summary, I realized what I needed was feedback on my story summary (plot, tension, characters, etc.) and pointers in the right direction where I needed it.

I emailed them today after I got back from the cafe and got a response within minutes. Because of the length of my story summary, Arielle suggested an additional half hour of paid consult time.

The next step is to pay them, send them my story, and then talk to them about it.

With my reactivated need for creativity, I have refilled supplies for card making and bought a small cabinet to store my jewelry making and card making crafts.

I spent time tonight starting a project for a card for a friend’s anniversary, which will go out late. After this, I am making a card for my nephew’s 18th birthday. Although I had limited choices for making a card for a boy/young man, I found a few things that will work. I look forward to more card crafting later this week.

Pix to come only after cards have been received by the recipients as they are probably reading this.

Know what the thing I miss most about the home I am renting out? A separate office with a door I can close to get away from my cats, especially since my office and my living room are now the same place.

I was peacefully listening to the Trentemoller radio station on Pandora, weaving myself a comet tail inspired earring, when my small cat Gwendolyn came prowling on my desk.

Okay. I can hear it now. Yes, I know I should have placed her back on the floor, but she sat down so I figured it would be fine.

When you weave, you should give yourself extra to make sure that you do not run out before your project is finished. This means that sometimes you pull the needle above you head and back to be able to work the thread taut against the beads.

Apparently, this motion was enough to terrify Gwendolyn into panic mode. Since she was laying on a piece of paper I left on my desk, her feet slipped as the paper slid out from under her. Her back feet tossed a pile of bagged beads and ear wires against the wall and down through the one-inch clearance between my desk and the wall.

The beads I had poured out in five, neat piles on the fleece surface I used to lay the beads were an instant sparkly jumble of blues, whites, and golds.

Moments like these make me want to become a hermit with no cats. Or at least a room with a door that I could close and keep the cats out. A room without their litter boxes. That would make me very happy.  Swapping my living room/office for my bedroom might solve the problem except that it would require a lot of piece-by-piece furniture swapping in an apartment less than 650 sq. ft.

Just thinking about it makes me cringe.

My sister Sylvia gave me the idea to give my mother a Valentine’s Day card when I saw that my mother received one from her a few days ago. I haven’t been one of those people to give a lot cards to people other than my husband.

When this morning arrived, I realized that my mom needed a Valentine’s Day card from me, too. This is her first one without my Dad. I dug out my card-making supplies, which I have not used in several years, and quickly put one together.

Here is what I gave my Mom this morning:

I wish you all a
Happy
Love
Day!