We are leisurely walking eastward on West 18th after an early evening dinner at Westville, a restaurant that focuses on fresh food at reasonable prices. A slim couple dressed in black clothing are briskly walking in the opposite direction from us, their arms tightly linked. The man stands a head taller than the girl, and their heads angle in towards each other. As they pass us, I overheard this conversation:

Woman with a husky voice asks, “Do you believe in love?”
Man replies, “I do.”

We are on the Long Beach bound train on the Long Island Rail Road heading home to Floral Park. A couple of boisterous friends who are audibly drunk sit down behind us. Woman #1 tells woman #2 about a casual one-night stand she recently had. I wonder whether the whole train car can hear her or just our half. Woman #2 is worse off and wants to get off the train as soon as possible. 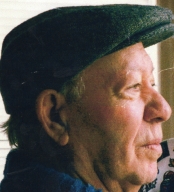 If my father were alive, he would have celebrated his 89th birthday with his wife of 65 years, two of his daughters, one son-in-law, and his only grandson. Dad would have eaten cheese ravioli with meatballs. For dessert, he would have tasted fresh baked coffee cake ridged with white icing and walnut pieces. He would chased the cake with sips of Starbucks Gold Coast coffee served in a white china teacup with blue decorations all around it and on its plate.

Today my Dad would have laughed when my mom told the story of an excerpt from the book Lady from the Longboat Key by Edith Barr Dunn. Ms. Dunn successfully bought and sold real estate in Longboat Key, Florida. One of her businesses was a beauty salon wherein she employed two gay men and a female impersonator. One day, she came into the office to find the office refrigerator filled with different kinds of fruit. Frustrated, she asked the employees:

“What are all these fruit doing here?”
One of the men replied: “What do you mean? There’s only three of us here.”

My Dad would have been there when we used Facetime to talk to my sister M, her husband J, and their son J2  who are currently in Southern California to celebrate my brother-in-laws’ 50th birthday during J2’s winter school break. I can imagine his face lighting up like a shining star, mouth in a wide open smile, cheeks bunching up, and laughing just to be able to see his grandson on the screen and wish him a great vacation. My Dad would have wished them all a great time despite feeling nauseous and in pain from a growing, too-large spleen.

After the meal, my Dad would have turned slowly around in this chair to grab his walker, pull himself up, and take slow, steady steps. He would have retreated to the empillowed chair and selected a classic movie while he napped there. My family and I would have sat around, laughed, and talked.

We would ask my Dad how he felt, but the answer was the same as the answer the last time you asked. He was feeling, more or less, chronically nauseous and often unable to keep food down. He was in pain when he needed to bend or move because the spleen had grown so large that it was pushing on other organs. If it was a particularly bad day, my Dad would tell you that he prayed for God to take him. My mother would beg him to stay.

The last four years after my Dad’s stroke were extremely hard on him. A robust, healthy, hard-working, construction manager who spent his days outdoors became a man too ill to enjoy his life, bathe by himself, or walk steadily unaided.  He often had difficulty swallowing and would choke on food. Whatever was happening to his body, his mind remained clear. He was a chronic insomniac who could never escape his body, the ultimate prison.

I have seen pictures of my Dad when he was younger. My Dad was a man with a big smile, glistening teeth, and a hearty laugh. The man I see in those pictures is not the man I remember. I remember the old, sick man who wished to die because his body’s ailments took away his life’s pleasures. He stopped eating ice cream because it made him too cold. When that happens, life has gotten pretty bad.

My wish for you is that, whatever happens, you relish your desire to eat ice cream.

Before we moved to NY to be near my elderly parents and ailing father, the only time I spent with my family was too-brief visits that invariably involved a lot of stress, fighting, and then retreating back to Massachusetts. Moving to NY to be closer to my parents and to be a resource for them improved my feelings towards them because I got to see my mom and dad under rather ordinary, non-holiday circumstances on a regular basis.

Since my dad died in December and my sister A returned home to Tennessee, I have made the effort to spend some time with my mother every day. This is easier for me than it sounds because I live in the apartment upstairs with my husband and three cats. We have our own space with its own entrance, shared foyer, a privacy door to our apartment, and we pay rent. Since I am working from home, I have the latitude to visit my mother several times a day and/or spend awhile with her.

The best thing about this arrangement is that I am laughing a lot more because my mom is a very funny lady. When I used to come home for visits, I might be around during a time when she was complaining a lot. I would find it hard to want to spend time with her because I might be staying with them in a nearby room. Now, because I spend a lot of time with her, the percent of time I spend with her where she is in complaining mode is less than it used to be.

My mother is a good storyteller. She will share with me memories of my father, growing up in dire poverty in Italy, or good times with friends she had. Her high-pitched, rapid-giggling style of laughing is enough to get you laughing so hard that you have tears streaming down your face without even having a reason to laugh.

I get to pop on downstairs and give her a hug. I get to offer to get things for her when I am out running errands on my own. In return, she feeds me. Oh, does she feed me! Even though my Italian-born excellent cook mother does not cook as much, she often shares what she cooks with me, or she will buy food and give us half. I fill her car with gas when it needs it. I call her doctor’s office or Medicare or Social Security or her various insurance and pension companies so she does not have to deal with talking over the phone with a thick accent and her hearing aid removed.

Just tonight, I came away with the some fresh baked coffee cake with drizzled icing and walnut bits. If a better relationship with my mother who makes me laugh isn’t the icing on the coffee cafe, then I don’t know what is.

Yesterday, I had a plan to make a short list of projects that I could work on every day during the work week along with a minimum amount of time to spend on them. Since I am looking to fill up at least 20 hours a week with productivity, I thought this would be a good way to start.

Have I followed my plan today? Nnnn-no.

However, this is not necessarily a bad thing. I had a list of to-do’s that have been hovering over my head. The # 1 is calling my financial advisor who, since last summer, has been calling me asking for updates. I met him to discuss moving my 403b to a standalone one because I was no longer at my employer. I moved the money to Vanguard, but have left it sitting in a brokerage account.

Did I call him today? Nnnn-no.

Instead, I answered a call from a recruiter, put together the requested materials and submitted a job application to them, applied for a remote technical writing position at a software company, replied to unanswered emails from 4 friends, replied to emails from other program managers at a SIG where I volunteer and scheduled a future chat date for the group, ate lunch, and played with the cats. That took over six hours (no, this post did not take me an hour to write).

I moved my call to my financial advisor to tomorrow because I am doing my volunteering tonight. My to-do list is only six items deep tomorrow instead of the 10 items I had on my list today. I moved two. I cheated. I know.

So will I call him tomorrow? Mmmm—

I recently signed up for Writer’s Digest magazine. In the very first issue, I find an article about the 80’s actor Andrew McCarthy who has found a second career as a travel writer for National Geographic Traveler magazine. I slowly read the article about how he found his latest calling, which he tells in his latest novel The Longest Way Home, One Man’s Quest for the Courage to Settle Down. I’ve often yearn to travel and do a lot of self reflection, so I ordered a copy through my local library.

END_OF_DOCUMENT_TOKEN_TO_BE_REPLACED

You don’t have to married to go on date night. Maybe you and your partner have been living together for so long that you feel like roommates rather than romantic partners. After you live with someone for years on end, the romance does get worn down by the humdrum routine of daily living.

How could it not? Our lives settle into routines: work routines for us, school routines for our kids (if we have them), errand day on the weekend, etc. After a while, the only excitement happens when you go on vacation or find a new hobby together. For my husband and I, finding a new joint hobby happens rarely because we are the opposites that attracted.

If you designate the same night each week for date night, it could be that even that gets to be routine. The only way to shake it up, other than changing the night of the date, is to commit to not to default to the same activity every week. It can get expensive and tiring to always come up with new things to do. At least, try to not do the same thing two weeks in a row.

Our default date night is eat dinner (in or out) and then stay home together. Watch a movie. Play games. Screw around. Or whatever we feel like doing. Because I deal with chronic health issues, I often only have so much energy. I might only have energy for engaging in one activity. Or we start off with dinner and then I poop out.

How do you keep your date nights interesting?